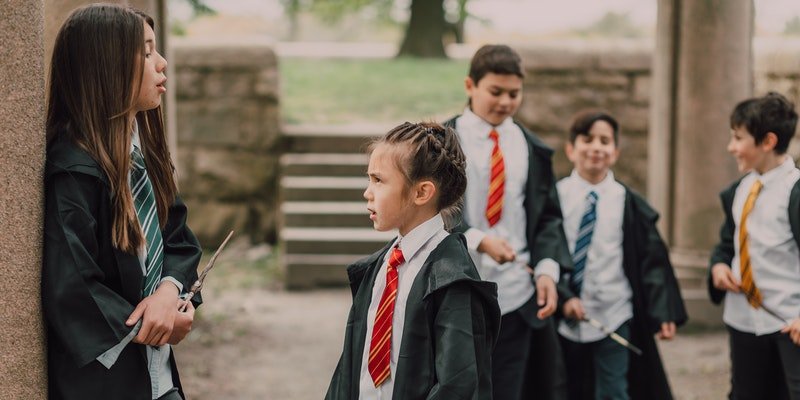 What Can We Learn by Watching Harry Potter?

We initially met Harry Potter, a bespectacled orphaned 11-year-old boy who had yet to discover his true identity as a wizard, in 1997. A character brought to life by British author J.K. Rowling, Harry Potter soon found his way into the hearts of adults and children alike. His immense popularity paved the way for 6 more books and an 8-part movie franchise.

Since its release, the Harry Potter series has sold over 500 million books while its movie franchise, which was released over a 9-year period, is estimated to have earned a total of $7.73 billion. After evolving into a global brand, Harry Potter is pegged to be worth $15 billion.

What led Harry Potter to become such a global pop culture phenomenon? The excellent writing, Rowling’s depiction of magical worlds, and the character development of Harry and his friends all contributed to the series’ success. The fact that the movie releases and characters kept pace with its audience’s growth from childhood to adolescence made it even more relatable and endearing.

Life Lessons We Can All Learn From Harry Potter

Today, Harry and the fantastic world that he lived in continue to inspire us and capture our imaginations. You can still find popular online quizzes like the Harry Potter House Quiz that will tell you if you belong to Gryffindor, Slytherin, Ravenclaw or Hufflepuff as a testament of its success.

Beyond the fun and magic, however, Harry Potter also taught us valuable life lessons. At its core, the series is really about the friendship between Harry, Ron Weasley, Hermione Granger, and the characters they meet along the way.

In honor of this unforgettable series, let’s review the life lessons we learned from watching Harry Potter and his friends grow up.

Happiness is a state of mind.

How many of us remember the iconic lesson Dumbledore left behind? “Happiness can be found, even in the darkest of times, if only one remembers to turn on the light.”

Dumbledore’s message of hope, strength, and optimism reminds us not to wait until circumstances become perfect before deciding to be happy.

The simple life of the Weasley family is an excellent example. The Weasleys lived in a rundown, cramped house and relied on hand-me-downs but they were as happy, if not more, than a wizard with a vault full of Galleons, Sickles, and Knuts.

Much of the Harry Potter storyline was driven by secrecy like the many references to “he who must not be named.” The characters were so afraid of Lord Voldemort that they vowed never to mention his name.

Again, the wise Dumbledore reminds us “Fear of a thing increases fear of a thing itself.” This is a lesson for us to never avoid what we fear. Instead, we should face our fears and talk about them because they lose their power over us when we are courageous enough to face them and deal with them.

Now, this is something we agree on. After all, how many of us crave the kind of friendship that Harry had with Hermione and Ron? Throughout the series, the three of them stuck together. Despite fights and disagreements, they grew closer to each other.

Many times Ron and Hermoine came to Harry’s rescue and vice versa. Harry Potter is essentially a story about friendship, love, and perseverance.

It's okay to turn to your parents for help.

Sometimes, there’s only so much you can do on your own. When you find yourself backed into a corner, need advice, or need someone to confide in, it’s okay to turn to your parents for help.

The next time you find yourself conflicted or caught in a tricky situation, reach out to your parents. Draco did. Despite going against the “Dark Lord” which would have gotten him killed, he ended up with a beautiful family at the end of the movie.

Invest in self-love and self-care.

We’ve all been guilty of pushing ourselves way beyond our limits to prove a point or emphasize our importance in a certain relationship. This is well illustrated in the movies.

As Sirius Black claimed, Hermione was the cleverest witch of her age. Her use of the time-traveling device, the Time-Turner, may have saved Buckbeak and Sirius Black, but it took far too much out of her. This led her to exercise self-care by abandoning a project she was passionate about.

Another example is Luna Lovegood who was constantly mocked and made fun of because of her eccentric personality. Despite being rejected by her peers, she stayed true to herself. That’s self-love.

The lesson is sometimes, self-love and self-care mean letting go of certain expectations and goals because our well-being is more important.

Community was a driving force in the Harry Potter movies. The 4 houses did so much more than segregate the students into groups based on their defining features, characteristics, and temperaments, it gave them a community to belong to.

Without that sense of community, Dumbledore’s army wouldn’t have won the final battle against the Dark Lord and his powerful band of followers. We may not have wizards and witches by our side, but we have friends and family we can rely on for love and support.

Don't let the muggles get you down!

The Harry Potter series throws light on the same social stigmas and discrimination our muggle world is firmly rooted in.

Hermoine was discriminated against by Malfoy and his band of Slytherin followers for being “muggle-born.” Neville Longbottom was constantly made fun of for being a questionable wizard. Professor Lupin was fired from his position because he was a werewolf and that scared the parents of the young wizards and witches. The list goes on.

If these characters didn’t let preconceived social rules and limitations define them, why should you? Believe in yourself and eradicate social evils like racism, homophobia, and bullying.

You can find help in unexpected places.

Did you ever think Snape would turn out to be one of the good guys? Nope, he appeared way too evil but he rose to the occasion when Harry needed him most. He’s one of the few characters who surprised us with the ways he redeemed himself.

When you feel like there’s no way that a situation can get better, don’t give up. Life is full of surprises and you may end up receiving help in unexpected ways and from unexpected places.

Ron was deathly afraid of spiders but he followed them (and nearly became their meal!) to save Hagrid and the school from the consequences of opening the Chamber of Secrets. Even when Boggart turned into a giant spider, he persevered and faced his fears to save others.

We can learn a thing or two from Ron. Facing our fears allows us to discover our true potential. We can feel uncertain and afraid but in the end, facing the unknown and going beyond our comfort zones is the only way to test our limits, become stronger, and grow.